June 21st 2018 – the US Supreme Court has overturned a 1992 decision under the Quill case that previously required physical presence to warrant the collection of sales tax. Internet retailers can now be pursued by states to collect sales and use tax even though physical presence such as having an office, holding inventory, or maintaining employees is not prevalent. The ruling came down in the South Dakota v. Wayfair, Inc. case to overturn the previous precedent. Shares of large online retailers such as Amazon, Wayfair, Etsy, and eBay all fell in trading following the ruling.
This marks a monumental development in the debate over the digital economy’s responsibility for the collection of sales tax. As companies increasingly conduct business across state lines, how states and the federal government craft tax legislation that addresses the evolution of ‘nexus’ has significant implications for e-commerce, digital services providers, and taxpayers alike.

The U.S. Supreme Court’s review of the current nexus standards at issue in South Dakota v. Wayfair, Inc., resulted in the Court overturning Quill Corp. v. North Dakota, which established the physical presence nexus standard that formerly applied to sales tax. The old physical presence nexus standard severely limited states’ abilities to impose sales tax on an out-of-state seller. In December 2017, the U.S. Government Accountability Office estimated that state and local governments lost between $8 billion-$13 billion in revenue in 2017 because they did not have the authority to require sales tax collection from all remote sellers and because purchasers commonly fail to self-assess and remit use taxes. In addition to lost sales tax revenues, states are also losing income tax revenues because states typically impose income taxes on businesses with an in-state physical presence.

With this case, the Supreme Court decided the physical presence standard is outdated, and states can constitutionally require out-of-state retailers to charge and collect sales and use taxes from in-state consumers when the retailer has no physical presence within a state. Prior to the ruling, over a dozen states, including South Dakota, had created economic nexus legislation for out-of-state sellers, despite a lack of authorization from Congress or the High Court. Moreover, about a dozen states imposed economic nexus standards for state income tax purposes.

When the case was recently argued before the Supreme Court, Justices across party lines appeared divided. Many questioned the potential impact of retroactive applications, the cost burdens for businesses should they be required to collect sales and use taxes, and whether a signal from the Court for congressional action was the better course of action.

As a result of the ruling, companies should take the time to fully understand their business connections across states. Both retailers of tangible products and digital services providers stand to face major repercussions as a result of the change in nexus standard. While some large online retailers have already begun collecting sales taxes, this change will accelerate disruption of the balance between online retail and brick-and-mortar retail. Digital service providers are charged with the complex task of understanding how their various services are taxed (or not) across state lines.

Actions to Consider as a result of the New Nexus Standard:

Below, we have outlined some of the major implications of the Supreme Court decision from several different perspectives: 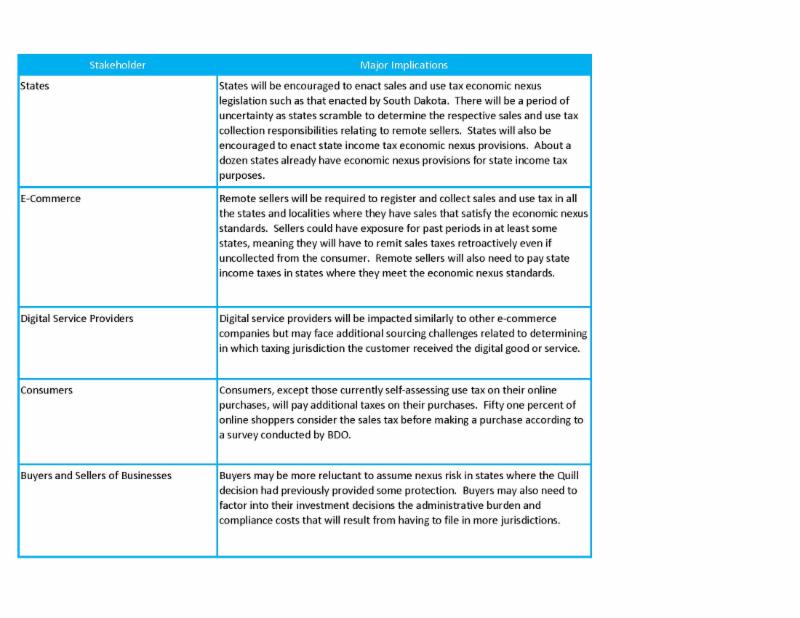 In light of all these changes, all companies with business activities across state lines should evaluate the effect of the new nexus standards.  Newburg & Company, LLP has assisted clients with sales and use tax planning and compliance for many years and can help your company navigate the ever-changing nexus landscape.

Because you are using an outdated version of MS Internet Explorer. For a better experience using websites, please upgrade to a modern web browser.